Starting a new pattern is exciting, but there’s also a certain amount of apprehension involved. There are always challenges, and sometimes the things that are difficult take me by surprise.

My current crochet project, the Between-Meal Centerpiece, has been a test of endurance. By one fellow Raveler’s count, there’s even a round that has more than 1,300 stitches. I haven’t yet reached that round, but I dread it now that I know it’s on the horizon. 🙂 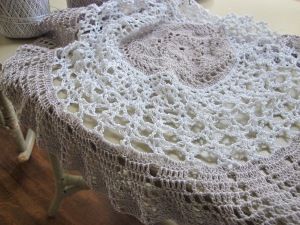 Something that I find striking about this pattern is that it seems to have multiple personalities. Parts of it are frilly and lacy, parts of it are surprisingly modern – the chevrons could be ripped right from patterns created in the past few years, for example. These different styles are definitely emphasized by the fact that I have chosen to separate the pattern “sections” with different threads.

The gray sections are Aunt Lydia’s Classic Crochet Thread in Silver, and the white with metallic is J&P Coats Metallic Knit-Cro-Sheen in White/Silver. The silver Aunt Lydia’s seems softer than other colors of the same brand, but it may just be that it seems soft compared to the metallic thread. I’ve never worked with the J&P before. It’s stiffer than I’m used to, and the metallic strand makes the thread twist badly as I work. That being said… it sparkles. Oooo, shiny. So there’s that.

These photos were taken while I was on round 36… I’m a bit farther now, but not much. I think this thing is going to need some serious blocking, which can’t come soon enough for me! 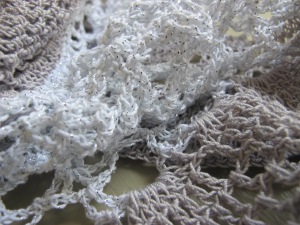 View all posts by babycakescreates